" ‘Tell me what you read and I’ll tell you who you are’ is true enough, but I’d know you better if you told me what you reread." Francois Moriac

The list of books that I would read again is endless, but on this occasion I decided to present you a book from the land of the rising sun"Little Toto girl at the window" written by Tetsuko Kuroyanagi.The book was published in Japan in 1981, and the Serbian edition was prepared by the TANESI publishing house in 2012. 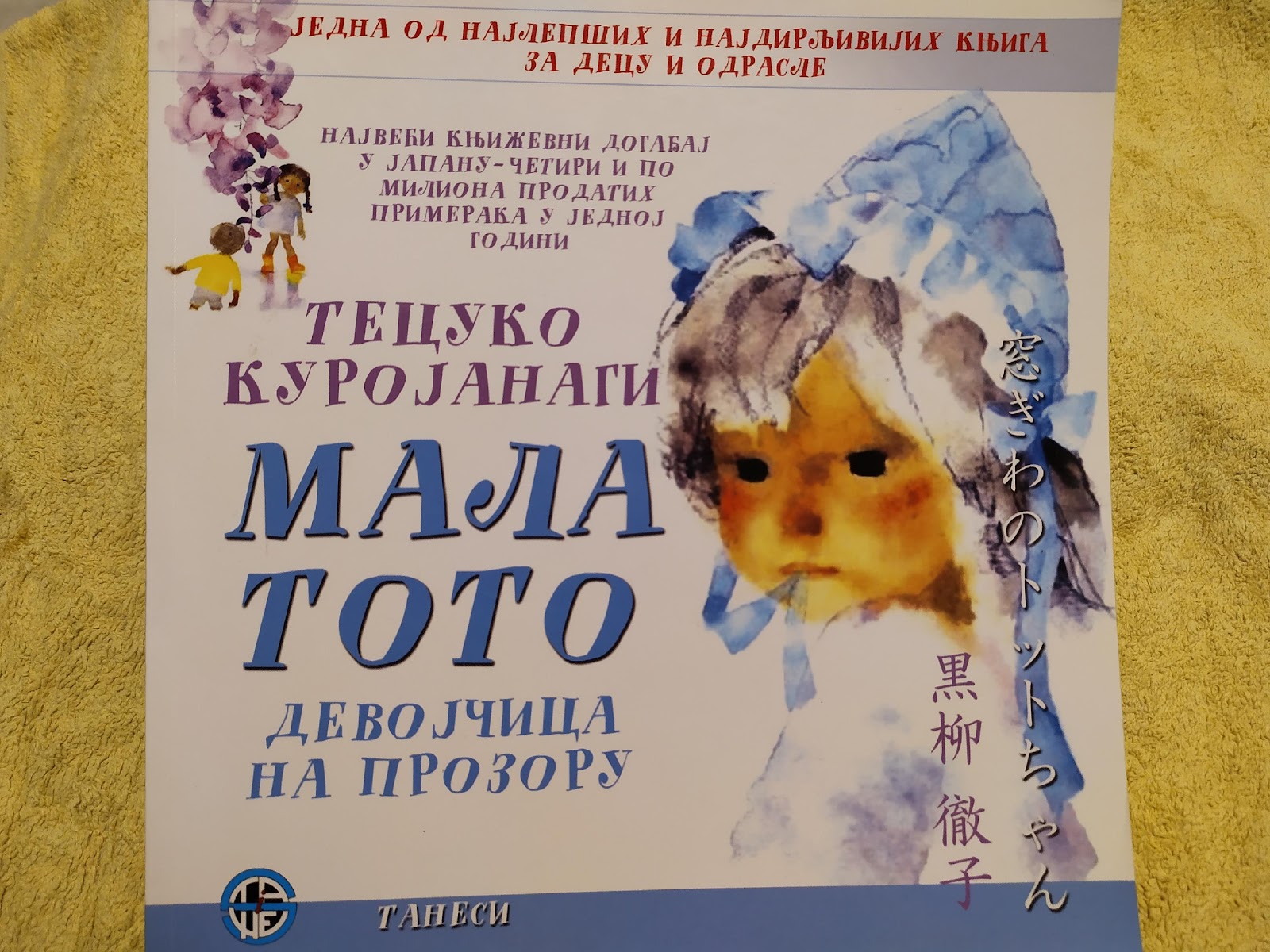 This book has become a historic event in Japanese publishing, as it has sold four and a half million copies in just one year. It has also become an official textbook. Maybe that's what placed it in English-speaking countries. The huge popularity of the extremely warm book, which deals with the unusual and very exciting upbringing of Little Toto, has made the book available on almost the entire planet.

Remembering the unusual school "Tomoe", of which she was a student, describing the educational methods of its founder and director, Mr. Kobayashi, who believed that all children are naturally good from birth and that their innate virtue can be easily hurt by the environment. and under the wrong influence of adults, Tecuko, from chapter to chapter, as well as her teacher, discovers the good nature of the child and develops it so that the child can grow and become a person with childish individual abilities. 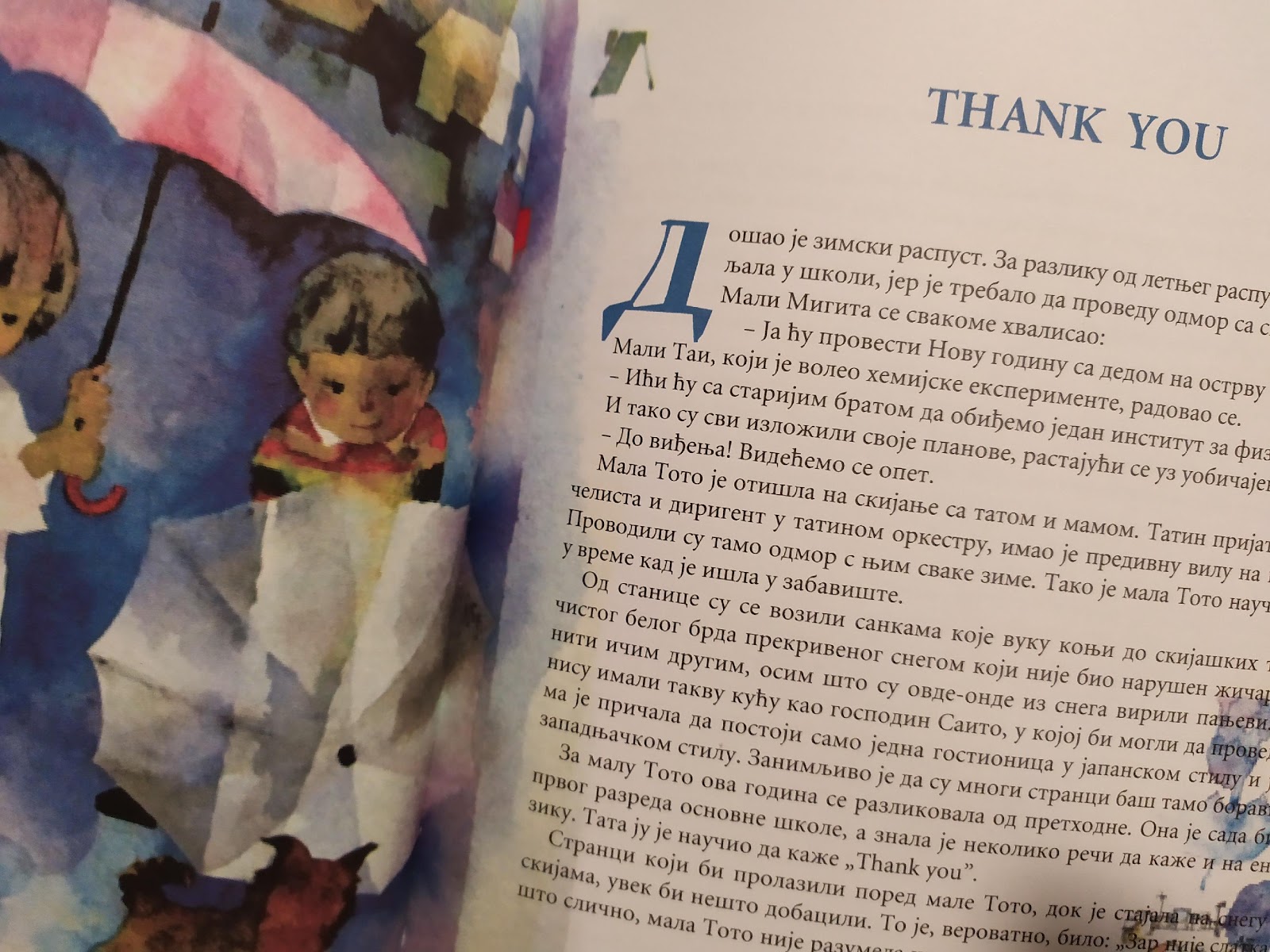 We all mostly remember more pleasant situations and moments from childhood, because the brain is in charge of protecting us from too much pain, discomfort and sadness, and it does that by suppressing many such situations… to face a bunch of problems growing up. After being removed from her first school, with the explanation that the teachers "climbed on her head", the girl moved to a school whose classrooms were real wagons housed in a green garden and whose principal was very little bothered by children's behavior, appearance, needs…

In the beautiful children's educational center of Tomoe, Sosaku Kobayashi, a very educated and good director introduced: eurythmy, night gatherings of children in pajamas, joint cooking, activities related to agriculture, staying in nature, student choice of subject to listen to. They could also bathe without bones, if they did not bring it… The children accepted differences, did not hide their emotions, ate healthy and available food which they called "sea food" and "mountain food". They could act, learn English, make trips and visits, camp in the classroom, help each other, taking care of other people's happiness and health. Different skills, ingenuity, dexterity, courage, truthfulness were valued…
The harmony of the relationship between the students and the school staff, the frequent praise and support of the children, the respect and commitment of the principal and all the employees alleviated and were a protective envelope for all the traumas of childhood. The children loved each other unconditionally and some actions could be "discussed"… At every opportunity, Mr. Kobayashi would say to a girl who gets tired easily - "You are a really good girl."

Thus, Little Toto described her schooling as a beautiful colorful Japanese fan in which, due to self-confidence, motivation and good methods in mastering knowledge and skills, dramatic situations could be easily overcome: when an extremely short child climbs a tall tree, Toto bursts into a septic tank, the school is bombed, or Taiji tells her out of sheer peace that he will not take her for a wife - even if she begs him.

The illustrations in the Book of Little Toto (Chihiro Ivasakiare so original, interesting and high quality, that holding the book in your hand, you can easily feel, smell and through the colorful aquarelle enter and stay in the ambience and story of the Tomoe school.
Maybe I chose this book because my favorite writer is Haruki Murakami, and the actor is Ken Watanabe, because I adore Japanese culture and sushi. Since I am a supporter of the holistic principle, on which I base my work in working with children - education and upbringing, I believe that all children are intelligent and good, they just need to be allowed to express themselves in their own way and gain as much self-confidence and courage.
I did not meet Tecuko, but in almost 40 years of working life, I met at least 40 Little Jovana, Bojana, Milica, Vesna…
I received this book as a gift from the family of my former student Vanja Sarić, with the comment that I reminded them of the director Kobayashi. 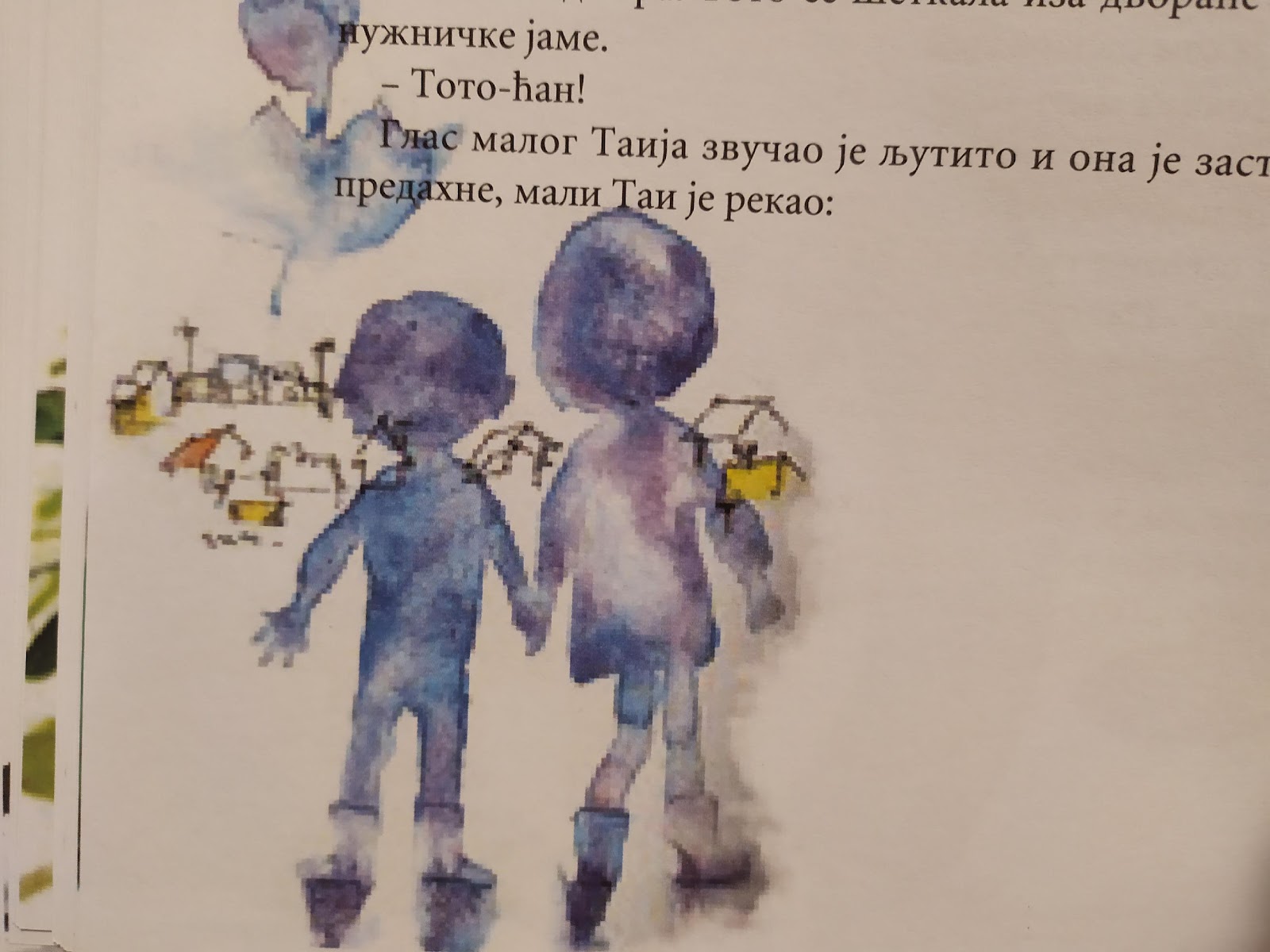 „"When I approach a child, he inspires in me two sentiments; tenderness for what he is, and respect for what he may become."Louis Pasteur