On Saturday, September 25, at the Hotel Moskva, recognitions and awards were presented to the Best Educators of Serbia who represent our country at two international competitions - Global Teacher Prize competition and Yidan Prize.

The association "Živojin Mišić", the national partner of the Varkey Foundation, has chosen the representatives of Serbia for the prestigious competition for the best teacher in the world - the Global Teacher Prize. This year's representatives are Vesela Mačkić, a teacher at the Ivan Gundulić Elementary School from Novi Sad, and Mladen Šljivović, a teacher of physics and applied sciences at the Zaječar Gymnasium in Zaječar.

In addition to the winners, numerous guests and friends of education attended the ceremony.

During the opening ceremony, Tamara Mihajlović, coordinator of the Association "Živojin Mišić", addressed the audience and pointed out: "Our educators, representatives of Serbia are teachers who change in accordance with changes in the world, in accordance with the labor market, go forward without waiting for changes in the system, with great commitment, effort, and motivation to make education better. Thank you all for that.” 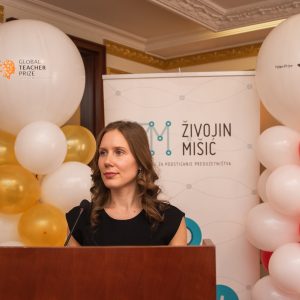 Zoran Stanojević, one of the commission members for the selection of national representatives for the Global Teacher Prize, also addressed the audience, emphasizing that it is an honor to be in good company and that for our children, the teacher is a very important actor in their progress. He pointed out that "in the age of distance learning that has been happening for more than two years, it is an honor to be in the good company of teachers who do qualitative work and who can be a role model for students." 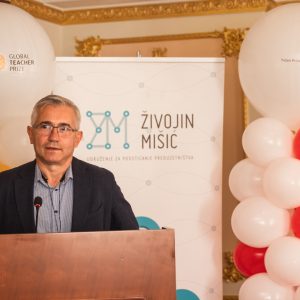 After the award ceremony, Vesela Mačkić, the Best Educator of Serbia for 2019, addressed the audience. She emphasized that she was touched by the teacher's role in the education, upbringing, and life of students. In addition, Vesela shared a quote from Abdul Kalam who said: “The purpose of education is to make good human beings with skill and expertise. Enlightened human beings can be created by teachers.” 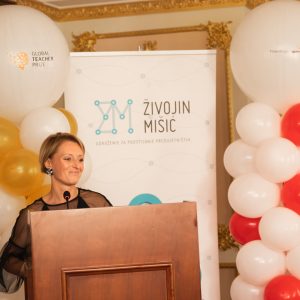 Mladen Šljivović, awarded Best Educator of Serbia for 2018, addressed the audience with the words: "Although I came to education as a graduate, my will to not give up at any cost hasn't changed, because giving up on students is not allowed. My job is to help young people succeed. That's the way I change the world for the better." 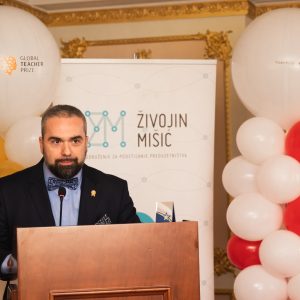 After winners, their friends, colleagues, and former students shared their stories, experiences, and emotions with those present. In addition, at the ceremony were premiered films of the representatives, which can be viewed on the Youtube channel of the Association.

The coordinator of the Association "Živojin Mišić", Tamara Mihajlović, spoke to the the audience in order to give recognition and awards to the Best Educators of Serbia who are representatives at the Yidan Prize competition. For the third year in a row, the Association "Živojin Mišić" in partnership with the Yidan Foundation, had the honor of nominating the two Best Educators of Serbia for the Yidan Award.

The award winner, Ljiljana Lazarević, addressed the audience, explaining the project "Classroom without Walls". The goal of this project is to encourage student activism through entrepreneurial learning and project activities. The ultimate goal is philanthropy and contribution to the society in which we live. Ljiljana stressed that: "This project has a significant role in the community because it helps students to become active members of society and participate in the decision-making process, learn to think entrepreneurially, develop empathy and solve problems in their environment." 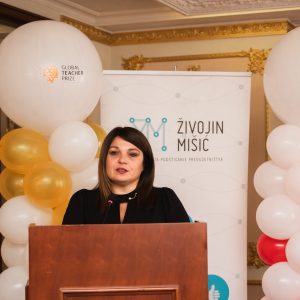 Đura Pađan, the Best Educator of Serbia for 2019 and this year's laureate for the Yidan Award, applied with a STEAM project that combines science, technology, mathematics, and engineering. Đura pointed out: "The idea is to donate robot kits to schools, to give them training, as well as for teachers to form their robotic clubs, whose work would result in participation in competitions from national to international. The project arouses great enthusiasm for learning and aims to motivate learners to engage in modern science." 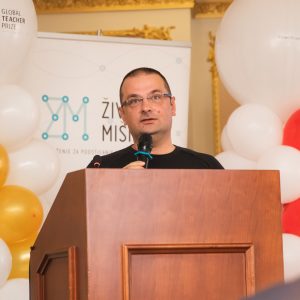 In addition to this year's laureates for the Yidan Award, Danijela Rakić and Goran Jovišić, who represented Serbia at this competition in 2019, received recognitions and awards.

Danijela Rakić addressed the audience with the words: “We must adapt our educational practice to the new age and new modern tendencies as much as possible. Culture and education are the faces of every state, and without them, there is no development of a society." Danijela stressed that: "The significance of her art project was to connect Serbia with cultural and educational innovations and tendencies of other countries, which would maximally realize the educational and artistic dimension, especially of the younger generations." 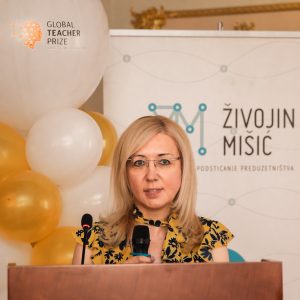 The second candidate for 2019 at the Yidan Prize was Goran Jovišić, who introduced the project with which he competed. "My role as an individual who embarked on pedagogical research "Free software in schools in Serbia, reviewing the situation and promoting its use" was to contribute to the transformation of educational policy and practice. The goal of the conducted research was to critically shed light on the possibilities, scope, and limitations of the "evidence-based" concept of software application in the educational process," said Goran. 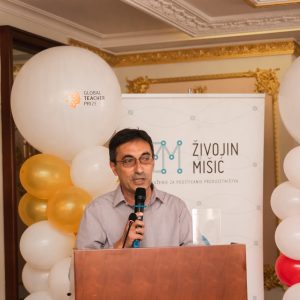 Thanks again to the best teachers, commission members, associates, guests, the best educators of Serbia who were there to support their colleagues, and thanks to the hotel "Moscow" for providing the space. We are proud to have the honor and pleasure to present our teachers, the Best Educators of Serbia, to the world.