The best educators in Serbia

On Saturday, December 21, in the stateroom of the Members of the Parliament’s Club, 10 awards were given to the Best Educators in Serbia for the year 2019.

The sixth award presentation ceremony was attended by numerous guests from the sphere of education, representatives of the former generations of the Best Educators of Serbia and members of the board who help us unselfishly every year with finding these brilliant people! 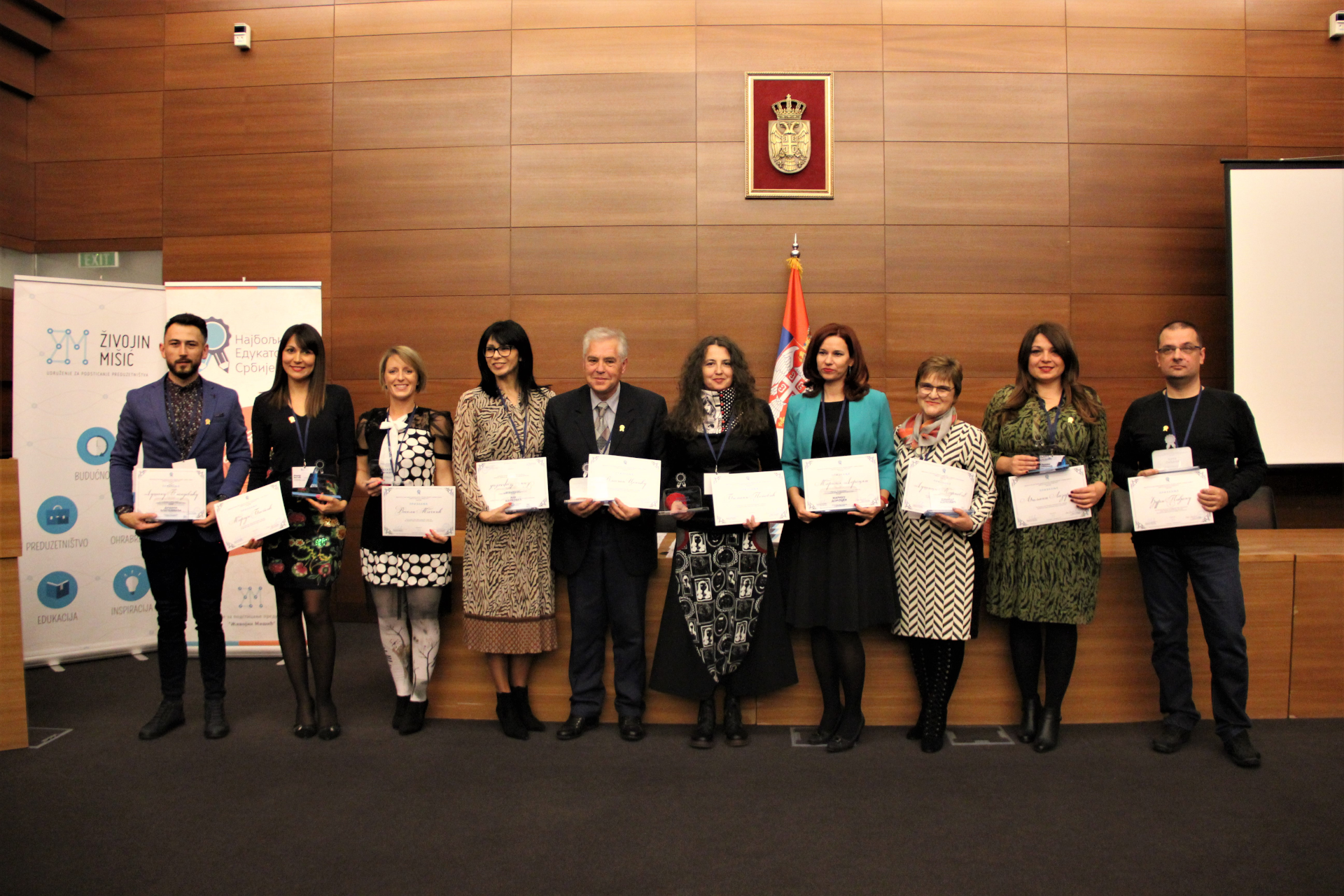 At the opening of the ceremony, Ivona Jovanović, the coordinator of the Association “Živojin Mišić”, addressed the attendees. “Once again, we are giving full credit today to the best ones among us, who teach our children, cause changes in this society and change the world for the better! Six years are not a small thing for us and a big thanks for your being with us today!”

Ivona placed emphasis on the importance of teachers in Serbia, pointed to the connection of the name of the association “Živojin Mišić” and the project “The Best Educators of Serbia” and presented the attendees with the annual work of the Association. 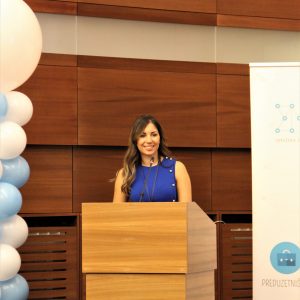 After the presentation of the achievements in 2019, a short video was shown in which the Best Educators of the former generations talk about how significant this award and the association “Živojin Mišić” itself are to them. You can watch the video on this link. .

The attendees were addressed by the friends of the Association, members of the board and the representative of the first generation of the awarded educators.

Vigor Majić, the director of the Petnica Research Station, said that this is: “The greatest and the most prestigious award for the work in education which exists in our country. We have not had anything similar for a very long time. This is the only award which is not given by any scheme or structure being designed in advance. I was a member of the jury, a witness of how much talk, comment, reading, watching was there, of all offered by the candidates and of how much dilemmas we had about reducing that number to the capacity of this award. I would be very happy if this capacity doubled, quadrupled in the following years…because there are plenty of people who do great things in our education. 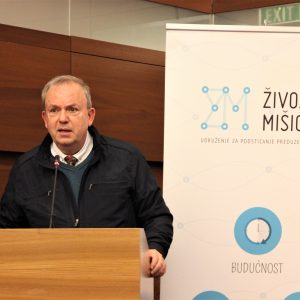 He said to the newly awarded educators: “Thank you for investing a large portion of your will in an honest and noble work, at the expense of all problems you certainly have. Spread that energy among your younger colleagues at school, apprentice teachers, beginners… Do not let your enthusiasm weaken when you confront some problems, push forwards, you have shown that you can do it; every child whom you help to bring good decisions is your success. I am proud and happy and maybe this is a post which, in the past few years, has made me the happiest man because I am here with you and take part in all of this.”

Branislav Ranđelović, the director of the Institute for the Assessment of Education, pointed out that he viewed himself through three roles in the association “Živojin Mišić”. “Not only as an associate of the Association where we have been working on the selection of the candidates for the Global Teacher Prize for years and where I experience this story personally because I am a ‘partaker’ in all of this. I appear as the representative of the Institute, there are the representatives of ZUOV and we want to say that public institutions monitor these initiatives because the best teachers are chosen in the best way and this impacts the whole Serbian education system in a stimulating manner. As for the third role, I appear here as your colleague teacher and I work both at university and secondary school and we make an effort in the same way to do our job as best as possible. I really feel warm inside when I see all of those brilliant biographies of the candidates and when we have such opportunities to associate more. 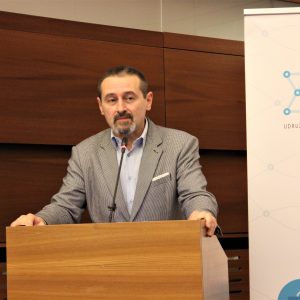 He sent three messages to the best teachers:

Saša Čorboloković, a Serbian language and literature teacher in Primary School “3. Oktobar” from Bor, greeted all the attendees, addressed them on behalf of the first generation of the awarded educators in 2014 and said to all why that year had been special to him. 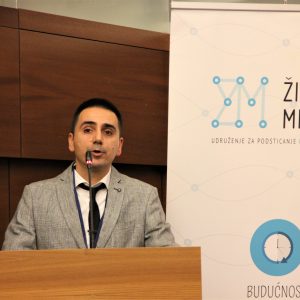 First, I met some new people, about whom, after saying a few words with them, I had an impression as if I had known them for years. Secondly, it is remarkable how much an association appreciates the work of a teacher at the moment when all compete for who will more underestimate the work of an educational worker, forgetting that the teaching profession is the basis of all other professions. It is not easy but it is possible and feasible. This is what the Association “Živojin Mišić” has realized, which many have not. The Association has made it possible and still makes it possible for educational workers to meet, compare and share their pedagogical and methodical experience. The Association is thought to be a place of making numerous friends, co-workers. In this way, enthusiasm is not an isolated phenomenon but a widespread network of contacts and people who consider teaching a holy place of modeling children’s souls. Thirdly, the award has encouraged me to be even better. Every following year, I attended the award presentation ceremony for the new generations of educators and was glad that there were more of us. This is your day! Welcome among the best where there is your well-deserved place.”

The Best Educators of Serbia for the year 2019 also addressed the attendees at the end of the ceremony.

Ana MarkovićAna Marković, a physics teacher in the First Grammar School of Kragujevac. “It is a nice feeling when someone notices that you like your job, that you approach it extremely optimistically and I am sure that we all are enthusiasts here, making an effort to maintain the quality in a proper way and saving face of our profession.

Biljana Popović, a primary school teacher in Primary School “Knez Sima Marković” in Barajevo. “There is a New Year’s gift in my hands, the award for the Best Educator of Serbia, thanks to my Santa Claus. Maybe they have been lying you all those years that there is no Santa Claus. But he is not an old grey man in a red costume. Santa Claus can be any of us. Anyone who can give love, a hug, make a good deed”

Đura Pađan, a teacher of technical education and informatics in Primary School “Vladislav Ribnikar” in Belgrade. “I am grateful to the Association “Živojin Mišić”. My way was not easy. There were both good and bad moments. I used the good ones in the best possible way and the less good moments as fuel for becoming even better.”

Dušan Blagojević, a Serbian language and literature teacher in Grammar School in Lebane, looked back on his profession. “Taking into account that I am very familiar with drama and theatre, I remembered that one good play has a thousand drawbacks, and one bad play just one – that it is not good. I hope that I do not belong to bad plays. What is good in my work is not accepting averageness, not consenting to being hidebound; it is encouraging students to critically think, motivate and strengthen the good and not consenting to all what draws us to the plunge. If this award is the award for all my refusals, then thanks to the association “Živojin Mišić”

Dušica Marković, a maths teacher in Primary School “Stefan Nemanja” in Niš. “My life is searching and at some point a silver lump appeared. I would like to thank the association “Živojin Mišić”, the jury which estimated that and my dear colleagues, who estimated that the lump was really worthy. “

Ljiljana Lazarević, a primary school teacher in Primary School “Miodrag Petrović Alas” in Belgrade, said: “I thank the association “Živojin Mišić” not because they have given me the award, but for taking care of the people who bring changes to our country, who have influence with children on building a better future.“ Ljiljana also looked back on how she takes children to mountain-climbing. “That very mountain has taught me, as a climber, that there are no bad conditions, but only bad equipment. I realized that I could do only one thing under all those bad condition – arming myself with the equipment. That is my education, patience, innovations and a constant thought about that we are here to listen to children and not that they listen to us.”

Marija Bastić, a primary school teacher in Primary School “Janko Veselinović” in Belgrade, expressed her gratitude. “It a great honour and pleasure to be the Best Educator of Serbia, especially when you know that your work has also been estimated by your colleagues, the Best Educators of Serbia, and not just by the board, in the past years.”

Marina Dorocki, a physics teacher in Grammar School “Isidora Sekulić” in Novi Sad, pointed out that, after her training in CERN, she was even more confident that we are a very intelligent people and that we need to appreciate more what we have and our education as well, and, therefore, she thanked the association “Živojin Mišić” for working on rewarding and motivating teachers.”

Veseča Mačkić, a primary school teacher in Primary School “Ivan Gundulić” in Novi Sad, shared with us her experience of one of her lessons. “A student told me: Teacher, you are not a true hero’. I started pondering and thought that I did not have any super powers – or maybe I did have?” She emphasized that she thought that all teachers in this stateroom were superheroes!

Vlasta Cenić, a Serbian language and literature teacher in Primary School “Vuk Karadžić” in Doljevac, addressed himself through a poem about a teacher and closed the ceremony with the verses “Listen to me, dear world, be a teacher, be a child” (“Poslušaj, dragi svete, budi uča, budi dete”)

You can read more about the educators here.. 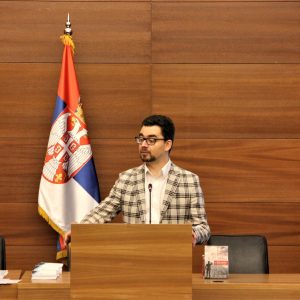 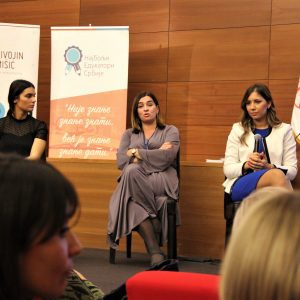 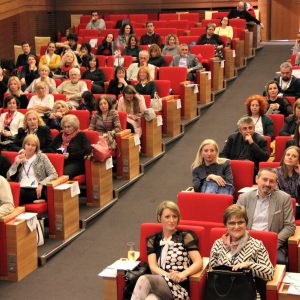